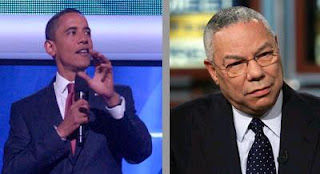 Colin Powell, who endorsed Barack Obama, is waiting for a newer, better, more shinier and socialistic GOP to emerge.
Boston.com reported, via HotAir:

Evidently, the Grand Old Party Powell envisions will quadruple the deficit in a year, support killing newborn babies that survived abortion, apologize to the world for the sins of America, chuckle at dead pundit jokes, support genocide over keeping troops in Iraq, surrender to terrorists, be influenced by the works of Marx, Wright, Alinsky and Ayers, and support abortion always, everywhere and at taxpayer’s expense.
Is this the party Powell envisions?

“At least Specter had the stones to walk out and announce he was now a dimocRAT.”