Let’s see…
Already this year, Barack Obama has signed several pieces of abortion legislation including funding foreign abortions. He also signed legislation to use taxpayer money to kill embryos in research. And, democrats are pushing legislation that will force healthcare providers to perform abortions even if it violates their moral or religious convictions.

Today CNN wants to know if Obama should be honored by Catholic University Notre Dame: 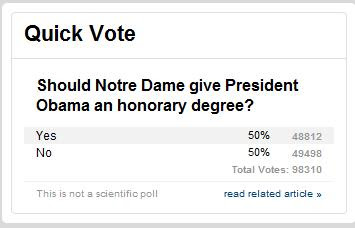 You can vote on the poll here.