What will they debate?
They both want US troops out of Iraq. They both want Israel to give up land.
Ahmadinejad wants America to apologize for its arrogance.
Obama wants to apologize.
So, what’s there to debate? 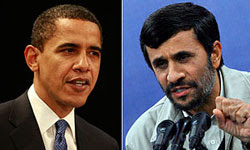 Iranian President Mahmoud Ahmadinejad on Sunday voiced readiness to attend a public debate with his US counterpart Barack Obama at the United Nations over the root causes of the world problems.

“As I invited the US president to a debate in (my address to) the United Nations during my visit to New York in the past, I repeat my call for a debate (with the US president) to study the root causes of global problems and management and collective participation in (the establishment of) sustainable security and peace,” Ahmadinejad told foreign reporters in a press conference at the presidential office here in Tehran today.

“The human being and powers should change their view about world management as this is the only way to establish sustainable peace,” Ahmadinejad said, and added, “And a major part of this change should take place in the kind of look that the dominant ruling systems have over the world, and a new system should be created in the world equations.”

In related news… Iran sent 6 warships into the Gulf of Aden today.