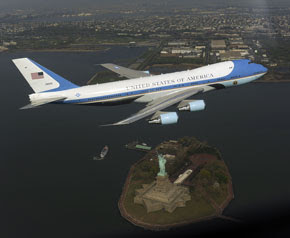 If you look real close that might be BO peaking out the window.

Could you even imagine if Bush would have done something this strange?

UPDATE: Dave Clark thinks there might be a Tuskegee connection:

I wonder if 2+2=4 here. The flyby is a curiosity in that the escort of the Presidents VC-25 were Alabama ANG F-16’s from the 187th Fighter Wing, and who’s roots go back to the Tuskegee airmen, the “Red Tails.” Their fame was to not lose a bomber/aircraft during escort.

George Lucas, a big contributor to the Obama campaign, is doing a movie on the Tuskegee airmen, and it could be that this escort “training mission” was a tax payer $300,000+ payback. How fitting it would be to show the Tuskegee’s descendants flying such an important modern day escort mission as a movie closer.