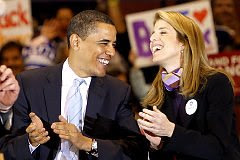 The Vatican blocked the Obama Administration’s appointment of Caroline Kennedy as US ambassador.
The Telegraph reported:

The Vatican has blocked the appointment of Caroline Kennedy as US ambassador, according to reports.

Vatican sources told Il Giornale that their support for abortion disqualified Ms Kennedy and other Roman Catholics President Barack Obama had been seeking to appoint.

Mr Obama was reportedly seeking to reward John F Kennedy’s daughter, who publicly gave her support to his election bid. She had been poised to replace Hillary Clinton as New York senator, but dropped out amid criticism that she lacked enough experience for the job.

The Italian paper said that the Vatican strongly disapproved of Mr Obama’s support for abortion and stem cell research. The impasse over the ambassadorial appointment threatens to cloud his meeting with the Pope during a G8 summit in Itay in July.