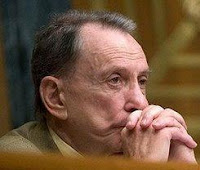 Veteran GOP Sen. Arlen Specter of Pennsylvania intends to announce Tuesday he will switch political parties and run in the Democratic primary in 2010.

Republican voters had sent him to the Senate five times. But faced with the prospect of a strong challenge from conservative Pat Toomey in the GOP primary and the state trending Democratic, Specter jumped ship.

“I deeply regret that I will be disappointing many friends and supporters,” Specter said in prepared remarks to be delivered at a news conference on Tuesday.

“I can understand their disappointment,” he continued. “I am also disappointed that so many in the party I have worked for for more than four decades do not want me to be their candidate. It is very painful on both sides.”

The switch puts Democrats within one vote of a filibuster-proof majority in the Senate. Democrats currently hold 56 seats in the Senate, and two independents typically vote with the party. Republicans have 41 seats, and there is one vacancy.

From his statement Specter says he saw the writing on the wall after he voted to support the trillion dollar Spendulus package:

When I supported the stimulus package, I knew that it would not be popular with the Republican Party. But, I saw the stimulus as necessary to lessen the risk of a far more serious recession than we are now experiencing.

Since then, I have traveled the State, talked to Republican leaders and office-holders and my supporters and I have carefully examined public opinion. It has become clear to me that the stimulus vote caused a schism which makes our differences irreconcilable. On this state of the record, I am unwilling to have my twenty-nine year Senate record judged by the Pennsylvania Republican primary electorate. I have not represented the Republican Party. I have represented the people of Pennsylvania.

I have decided to run for re-election in 2010 in the Democratic primary.

After years of damaging the GOP, it was his Spendulus vote was the last straw.
…So long, Arlen.

“Some in the Republican Party are happy about this. I am not. Let’s be honest-Senator Specter didn’t leave the GOP based on principles of any kind. He left to further his personal political interests because he knew that he was going to lose a Republican primary due to his left-wing voting record. Republicans look forward to beating Sen. Specter in 2010, assuming the Democrats don’t do it first.”