It’s official.
The new “progressives” will not be promoting democracy. 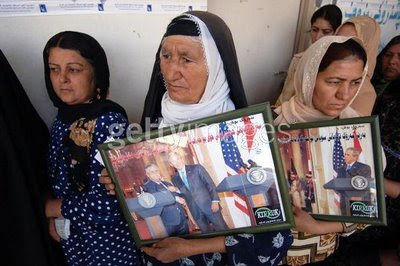 Iraqi women carrying pictures of President George W. Bush show up to vote in Iraq’s national referendum on a draft constitution October 15, 2005, at a polling station in central Iraq. (Via Free Thoughts)

Ron Howard spoke for the majority of the new “progressives” today when he said that he hopes the new America will not find the need to export democracy to the world.
NewsBusters reported:

Film director Ron Howard is “very optimistic” about the future of America, so long as the nation makes an “adjustment,” to fulfill his hope a “more progressive” nation will mean “at a certain point I don’t think we’ll be so consumed with being the pre-eminent super-power and, you know, driven by sort of militarism and this need to export, you know, democracy.” Howard’s reasoning, on Friday night’s Real Time with Bill Maher, came in response to Maher’s formulation that America has “seen better days.

Of course, we’re not surprised by this.
It’s been obvious for a quite a while that Leftists have no desire to bring freedom to those persecuted masses around the globe. Just look at Iraq. And, look at Iran and North Korea today. Freedom is the last of objective of the Left.
Even in Afghanistan the Left today sees freedom and democracy as an after thought. They even want to negotiate with the Taliban- and we know what that means for the Afghan women. This new-old policy goes beyond poor judgement. This is just selfish and evil.

We all knew what Ron Howard told Bill Maher about progressives was true.
He was just honest enough to admit it.