“You get the general tenor of this,” tea party. “Anti-government, anti-CNN since this is highly promoted by the right-wing conservative network Fox and since I can’t really hear much more and I think this is not really family viewing. Toss it back to you Kyra.”

Flying Debris was there and took this photo of Susan lecturing the right-wing extremists on the virtues of Dear Leader: 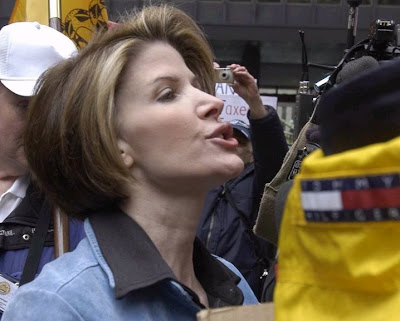 This was despite the fact that Susan had no problem when Bush was called a fascist at a rally that she was covering back in January 2006.

Well, Shepard Smith at FOX News would have none of it.
Here is his response to Roesgen:

“Just moments ago, that Susan Roesgen over there at the CNN that people used to watch all the time a long time ago. She says that this is anti-CNN and anti-government and highly promoted by the conservative FOX network… Who’s anti-CNN? Settle down Susan! Come on, girl!… And, what is an anti-tax I’m fed up rally that has nothing to do with CNN? Susan Roesgen. Nobody hates you. We love CNN now. Relax everybody. Don’t get your hate on.”

More… El Rider was there:

Before Ms. Roesgen descended into condescending propaganda the small crowd where she and her cameraman had set up was very respectful with many of them looking to get on television, people stood in a circle that allowed Ms. Roesgen room to roam in what was a very crowded public place. When CNN pulled out the Obama-as-Hitler guy from the crowd (he had been standing in the area for some time) some in the crowd yelled for her to interview one of the thousands of normal folks at the event. It wasn’t until Ms. Roesgen interrupted and attempted to correct the gentleman with a baby that the crowd became unruly, chanting “CNN Sucks!” and “You Are Not A Reporter!” The crowd was anti-CNN, due completely to the actions of CNN.