Uh-Oh… Here comes a strongly worded letter from the UN. 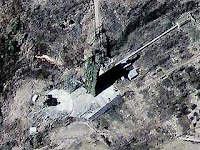 The launchpad in North Korea which houses the three-stage Taepodong-2 missile. (FOX News)

North Korea defiantly carried out a provocative rocket launch Sunday that the U.S., Japan and other nations suspect was a cover for a test of its long-range missile technology.

“We look on this as a provocative act,” U.S. State Department spokesman Fred Lash said.

The rocket flew over Japan and landed in the Pacific Ocean, the Japanese broadcaster NHK said, citing its government.

That stern finger wagging by President Obama didn’t seem to deter them much, did it?