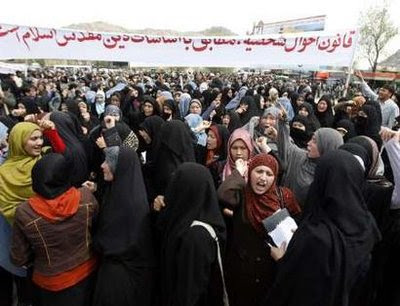 Afghan Shiite Muslim protesters shout during a demonstration in Kabul April 15, 2009. Afghan women staged rival demonstrations for and against a new family law, which opponents said would revive the cruel treatment of women of the Taliban era but supporters said it would defend Islamic Justice. (REUTERS/Omar Sobhani)

Lovely. Womens right’s activists were pelted with stones at a protest today in Afghanistan.
They were protesting against marital rape.
FOX News reported:

A group of some 1,000 Afghans swarmed a demonstration of 300 women protesting against a new conservative marriage law on Wednesday. The women were pelted with small stones as police struggled to keep the two groups apart.

The law, passed last month, says a husband can demand sex with his wife every four days unless she is ill or would be harmed by intercourse — a clause that critics say legalizes marital rape. It also regulates when and for what reasons a wife may leave her home alone.

Women’s rights activists scheduled a protest Wednesday attended by mostly young women. But the group was swamped by counter-protesters — both men and women — who shouted down the women’s chants.

Some picked up gravel and stones and threw them at the women, while others shouted “Death to the slaves of the Christians!” Female police held hands around the group to create a protective barrier.