“Unfortunately [McVeigh] was a vet, that’s where he got his training and so when I was told about the report, it rang true with me, this has happened in the past. That is a far cry, however, from saying veterans somehow are at risk.”

Unfortunately, we have a DHS Secretary who has no idea what she’s talking about. 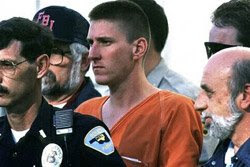 Timothy McVeigh was a top-scoring gunner with the 25 mm cannon of the Bradley Fighting Vehicles used by the U.S. 1st Infantry Division to which he was assigned.
He was trained as a gunner. He was not trained in bomb-making.

McVeigh did not use his training in the service to blow up the the Alfred P. Murrah Building in Oklahoma City.
He learned about making bombs after he left the service.

Napolitano was not only wrong about the millions of US veterans with her offensive memo.
She was also wrong about Timothy McVeigh.
Hat Tip Joe