Question: How do you get rid of a Marxist dictator?
Answer: Let him hunger strike.

Talk about an opportunity!
How often do you get to watch your Marxist dictator starve himself?
It’s like Christmas in April. 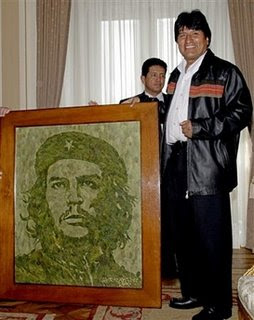 Bolivian President Evo Morales, a former coca farmer, holds a portrait made with coca leaves of Ernesto ‘Che’ Guevara, the Argentine-born Cuban revolutionary who died in his unsuccessful attempt to bring communism to Bolivia, in La Paz, March 13, 2006. (Reuters)

Bolivian Marxist Evo Morales is on a hunger strike because the upper chamber of Parliament refuses to sign legislation that would give him sweeping powers and allow him to continue his rule for years.
RIA Novosti reported, via LGF:

Some 1,000 Bolivians have joined President Evo Morales in a hunger strike to demand that the country’s congress pass an electoral law ratifying a date for general elections in December.

Leaders of several labor and social groups have pledged to take part in the hunger strike.

The new constitution came into effect on February 7. By law, the new presidential and parliamentary elections must be held on December 6. Opposition parties believe this will give Morales an unfair advantage in the upcoming elections, and have so far refused to enact the new election law.

Opposition parties delaying the enacting of the new law have demanded an updated voter registry, raised arguments over whether Bolivian expatriates should be able to vote, and contested the number of seats in Congress that should be assigned to indigenous groups.