John Ziegler was at the Hi Pointe Theater in St. Louis, Missouri on Tuesday nght for the screening of “Media Malpractice: How Obama Got Elected and Palin Was Targeted”. There was a great turn out at the theater. The audience was engaged and cheered and hissed throughout the documentary. The movie was great. It moves at a good pace and definitely captures your attention.
Oh, and there is a shot of Gateway Pundit in the flick– Give it 2 thumbs up.

Afterwards, John took a few questions from the audience on the role of the media in the election of Barack Obama. Later outside the historic theater John talked about the media’s never-ending love affair with Barack Obama.

John also talked about his ambush on The View and his reaction to Whoopi Goldberg and Joy Behar. (She’s a b*tch.) He also discussed the lawsuit he has against USC for his arrest while reporting at a reporter’s conference on campus.

Agreed. It’s hard to argue with his take on Behar.

The great Mark Reardon from KMOX Radio in St. Louis helped organize the event. Mark follows Rush Limbaugh on the air here in St. Louis during the week. 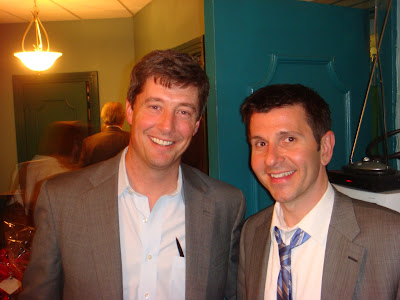 John Ziegler and Mark Reardon at the Media Malpractice screening in St. Louis.