Hillary Clinton told General Petraeus that she would not believe him when he came to Congress to report on security gains in Iraq in 2007:

Hillary told Petraeus she would have to “willingly suspend disbelief” to accept his report on Iraq.

ENEMY-INITIATED ATTACKS AGAINST THE COALITION AND ITS PARTNERS, BY WEEK 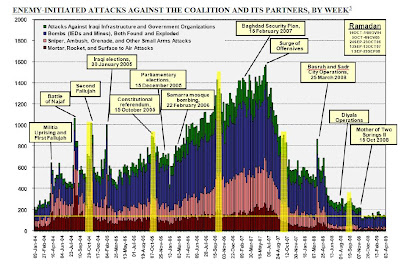 (Brookings)
Hillary was a little late in acknowledging the progress in Iraq.

Today, Secretary of State Hillary Rodham Clinton told Iraqi leaders that the country was on the right track.
It was likely the first positive thing she has ever said about the fledgling democracy.
FOX News reported:

U.S. Secretary of State Hillary Rodham Clinton said on Saturday that this week’s deadly suicide bombings in Iraq are a sign that extremists are afraid the Iraqi government is succeeding.

Making her first trip to Iraq as America’s top diplomat, Clinton said the country has made great strides despite the recent violence that killed at least 159 people on Thursday and Friday.

“I think that these suicide bombings … are unfortunately, in a tragic way, a signal that the rejectionists fear that Iraq is going in the right direction,” Clinton told reporters traveling aboard her plane ahead of her unannounced visit to Baghdad.

“I think in Iraq there will always be political conflicts, there will always be, as in any society, sides drawn between different factions, but I really believe Iraq as a whole is on the right track,” she said, citing “overwhelming evidence” of “really impressive” progress.

“Are there going to be bad days? Yes, there are,” Clinton said. “But I don’t know of any difficult international situation anywhere in the world or history where there haven’t been bad days.”

During her husband’s presidency a million Iraqis were killed by Saddam and a UN imposed embargo.
500,000 Iraqi children died during the embargo.
Since the Iraq War began in 2003 100,000 Iraqis have been killed.