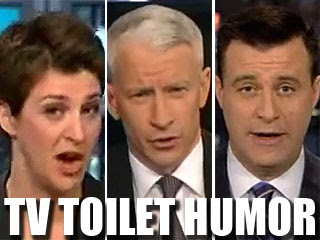 For thousands of Americans, Tax Day was a moment to protest what they see as bloated budgets and a pile of debt being passed on to their children.

For CNN, MSNBC and other media outlets, it was a once-in-a-lifetime opportunity to use the word “teabagging” in a sentence.

Teabagging, for those who don’t live in a frat house, refers to a sexual act involving part of the male genitalia and a second person’s face or mouth.

So when the anti-tax “tea party” protests were held Wednesday across the country, cable anchors and guests — who for weeks had all but ignored the story — covered the protests by cracking a litany of barely concealed sexual references.

MSNBC’s David Shuster weaved a tapestry of “Animal House” humor Monday as he filled in for Countdown host Keith Olbermann.

The protests, he explained, amount to “Teabagging day for the right wing and they are going nuts for it.”

He described the parties as simultaneously “full-throated” and “toothless,” and continued: “They want to give President Obama a strong tongue-lashing and lick government spending.” Shuster also noted how the protesters “whipped out” the demonstrations this past weekend.

Since they are now using nasty sexual references to describe those who dare challenge their Leftist ideology…
Can we all now agree that the liberal media hates anything conservative?