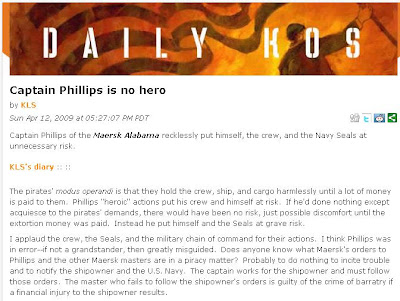 Far left Daily Kos blog could hold it in no longer.
Today they lashed out at hero Captain Phillips, via LGF:

The pirates’ modus operandi is that they hold the crew, ship, and cargo harmlessly until a lot of money is paid to them. Phillips “heroic” actions put his crew and himself at risk. If he’d done nothing except acquiesce to the pirates’ demands, there would have been no risk, just possible discomfort until the extortion money was paid. Instead he put himself and the Seals at grave risk.

I applaud the crew, the Seals, and the military chain of command for their actions. I think Phillips was in error–if not a grandstander, then greatly misguided. Does anyone know what Maersk’s orders to Phillips and the other Maersk masters are in a piracy matter? Probably to do nothing to incite trouble and to notify the shipowner and the U.S. Navy. The captain works for the shipowner and must follow those orders. The master who fails to follow the shipowner’s orders is guilty of the crime of barratry if a financial injury to the shipowner results.

Only on the left are heroes like Captain Phillips, who put his life in danger for the freedom of his men, called grandstanders.