Will Pakistan be the first nation to fall to the Islamists during Obama’s watch?
It’s looking that way.

This week the Pakistani government released Al-Qaeda linked Red Mosque leader Maulana Abdul Aziz.
The last time we saw Maulana he was fleeing the Red Mosque in a burka. 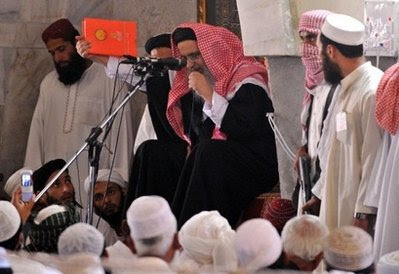 Red Mosque chief cleric Maulana Abdul Aziz delivers a sermon in Islamabad on April 17, 2009. The most radical mosque in Islamabad reverberated Friday with calls for jihad as the cleric, released on bail, asked thousands of people to make sacrifices to turn Pakistan into an Islamic order. (AFP/Aamir Qureshi)

So far this year 1,395 Pakistanis have been killed in 1842 terrorist attacks from January to March.
The Daily Times reported:

The government failed to table even a single inquiry report in parliament on 1,842 terrorist attacks from January to March that killed at least 1,395 people and causing losses amounting to millions of rupees.

The ministry provided estimated losses to private properties, but said that losses to public properties, possibly amounted to billions of rupees, had not been calculated yet.

US experts reported yesterday that Pakistan is on course to become an Islamist nuclear state.