Four people were killed when a car slammed into a crowd of people watching the Queen’s Day Parade in The Netherlands.

Witnesses said that the black Suzuki Swift appeared to deliberately target an open bus carrying Queen Beatrix and her family:

Four people were killed and 12 wounded when a car careered into a crowd of people watching the Dutch royal family riding past in an open-top bus. The man driving the car was said to be a white male in his twenties and had to be cut out of his car before he was arrested. 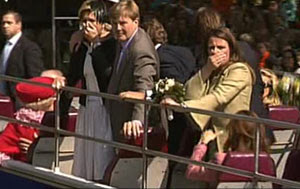 The Royal Family was riding in an open-top bus and were shocked by the car attack. (RNW)

The incident took place Thursday in the town of Apeldoorn during celebrations for Queen’s Day, an annual holiday in the Netherlands.

Queen Beatrix was in the bus with her family when the black hatchback zoomed past and slammed into the spectators.

Geenstilj is posting updates on the situation.

There are more photos from the attack here and here.

UPDATE: The Times Online reported: A 38-year-old Dutchman, who was driving a black hatchback, has been arrested on suspicion of carrying out an attack on the Royal Family.

Bloomberg added: Ludo Goossens, the public prosecutor, said, “We have reason to believe that this was a deliberate act.”

UPDATE 2: Photos of the killer are here.

Klein Verzet has more on the story including this:

The culprit has a name: Karst Tates, a recently layed-off ex-employee of a private security firm. He lived alone in an apartment in Huissen. Neighbours describe him as a normal, if somewhat private, person. In the few moments of consciousness right after the crash he has stated he was making an attempt at the royal family.