In May 2006 antiwar Rep. John Murtha (D-PA) accused US marines of killing innocent Iraqis “in cold blood” after TIME magazine published a piece of Al-Qaeda propaganda about an deadly incident in Haditha, Iraq. Notice the ABC headline: “Worse than Abu Ghraib”
Murtha was wrong.
7 of 8 US marines have now had their charges dismissed.

Today, a federal court decided that Rep. John Murtha cannot be sued for slandering the Haditha marines.
The AP reported, via Instapundit:

A federal appeals court ruled Tuesday that Rep. John Murtha cannot be sued for accusing U.S. Marines of murdering Iraqi civilians ‘in cold blood,’ remarks that sparked outrage among conservative commentators. The appeals court in Washington dismissed a defamation lawsuit brought by a Marine who led the squad in the attack. The judges agreed with Murtha that he was immune from the lawsuit because he was acting in his official role as a lawmaker when he made the comments to reporters.

7 of 8 marines who have now had their charges dismissed.
One marine awaits justice. 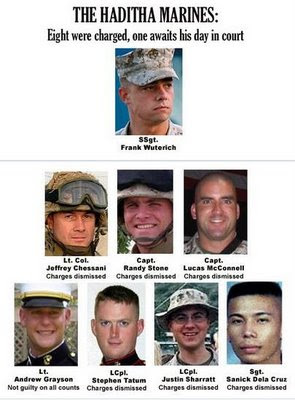 Photos via Defend Our Marines.
John Murtha slandered the Haditha Marines when he gave several interviews after the inaccurate story broke in TIME Magazine saying that the US marines killed innocent civilians in cold blood. It was later discovered that the story was fed to the media and Murtha by radical Islamists in Iraq.

John Murtha has never apologized to these innocent US Marines.