Before President Obama decides to prosecute Bush Administration officials for “torture” he better read this document or at least airbrush it from the internet.

Doug Ross discovered this CIA memo from 2005 that discussed the enhanced interrogation tecniques (EIT) used by the CIA on high level Al-Qaeda detainees. The actual results of the EITs are described in the partially redacted 5/30/2005 memo (U.S. Department of Justice Office of Legal Counsel, MEMORANDUM FOB JOHN A. RIZZO, SENIOR DEPUTY GENERAL COUNSEL, CENTRAL INTELLIGENCE AGENCY, “Re: Application of ‘United States Obligation; Under Article 16 of the Convention Against Torture to Certain Techniques That May Be Used in the Interrogation of High Value al Qaeda Detainees'”, originally classified TOP SECRET/NOFORN).

According to the document (page 5) the “waterboard” is subject to additional limits than regular interrogation techniques. It can be used on high value targets only if their is credible intelligence that a terror attack is immenent:

Click to Enlarge
On page 6 of the document CIA officials reported that the waterboard was only used on 3 high profile detainees.

This section on page 10 shows the incredible amount of information gathered from KSM after EIT were used, that led to the discovery of a second wave attack planned for Los Angeles. The use of EIT also led to the arrest of several Al-Qaeda operatives: 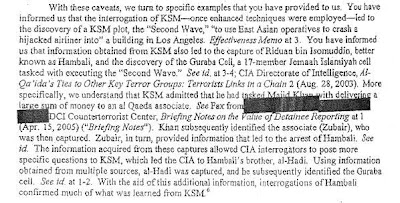 Using EIT on 9-11 mastermind Khalid Sheik Mohammed disrupted “dozens” of planned al-Qaida attacks and saved hundreds and thousands of lives. Waterboarding 9-11 mastermind Khalid Sheik Mohammed led to information that prevented a similar attack on Los Angeles. According to a former intelligence agent, waterboarding of terrorist Abu Zubaydah got him to talk in less than 35 seconds.

The EIT are designed so as not to cause serious pain or lasting harm:

Click to Enlarge
Doug Ross has more on this forgotten CIA document.

The Obama Administration announced yesterday that they will not rule out prosecuting President Bush for torture!