A 15 year-old murdered 22 Shia Muslims in a suicider attack in Pakistan.
His legs and head were found at the site of the blast.

Local Shiites burned a US flag in protest(?) 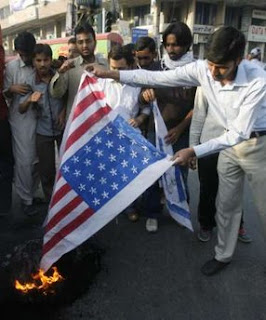 Pakistani Shi’ite Muslims burn a U.S flag during a protest against the bomb blast at a Shi’ite religious centre in Chakwal, in Lahore April 5, 2009. A suicide bomber blew himself up at a gathering of minority Shi’ite Muslims in Pakistan on Sunday killing 22 people, police said. (REUTERS/Mohsin Raza)

A suicide bomber blew himself up at a Shia religious gathering in an Imambargah in Chakwal on Sunday, killing at least 22 people and wounding 60.

The attacker struck at the gates of a Shia mosque where some 1,200 people were attending a religious gathering, police said.

“Twenty-two precious lives have been lost in this attack,” Punjab police chief Shaukat Javed told reporters. He said a joint investigation team had been constituted to probe the attack.

The official said the suicide bomber appeared to be a 15-year-old boy whose legs and head, with damage to the face, had been found at the blast site.

The Taliban reported on Sunday that they would carry out 2 suicide missions in Pakistan every week.
They did not mention anything about using children.