For the past week Barack Obama has traveled Europe attacking President Bush and apologizing for the liberation of Iraq from the brutal Saddam Hussein regime.
Just hours ago Obama landed in Baghdad for a surprise visit.

For some reason the media payed little attention to the thousands who protested Obama in Turkey. 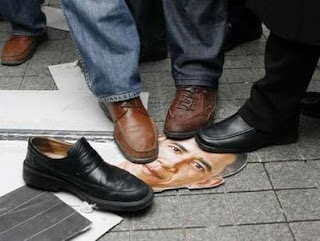 Turkish demonstrators step on a poster of U.S. President Barack Obama during a protest in Istanbul April 7, 2009. (REUTERS/Gurcan Ozturk)

U.S. President Barack Obama made an unannounced visit to Baghdad on Tuesday, marking a new chapter in his strategy to wind down the unpopular war in Iraq and shift the United States’ military focus to Afghanistan.

To the media and liberals- It’s always about “winding down the unpopular war.”
It’s never about winning.

Although, Obama and the liberal media ignore the good news, the US is making incredible gains in Iraq.

Click to Enlarge
The number of American troops killed in Iraq in March dropped to single figures for the first time since the war began in 2003. The US lost 9 soldiers in March, the lowest number of US deaths since the 2003 invasion.

You have to wonder what the soldiers currently serving in Iraq think of this visit?

Maybe he’s there to change the name from Camp Victory to “Camp Apologize” or “Camp Retreat”???

Not that that would surprise us.