Democrats, including White House Budget Director Peter Orszag, continued to pound George Bush this weekend for the failed policies of the last 8 years.

Those failed policies dropped the deficit 4 of 8 years Bush was president, held an average unemployment at 5.2%, saw the strongest productivity growth in 4 decades and witnessed robust GDP growth.
Bush was able to do this despite 9-11, a recession he inheritied, wars in Iraq and Afghanistan, and Hurricane Katrina.
He did this by cutting taxes and giving people back their own money to invest
If only we could be so lucky to have those failed Bush policies today.

Instead we’ve Democrats who are determined to spend their way out of this recession.
And, we have this:

The stock market had its worst January since 1896 followed by its worst February since 1933 under the Obama Administration.
And, now March is off to a horrid start.
How much hope and change can we take?

UPDATE: It’s a definitely a plunge- 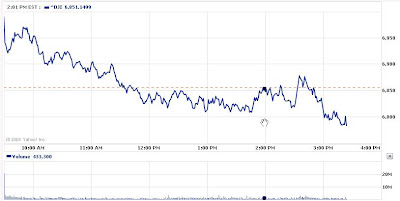 Meanwhile… Wednesday night is party night at the White House.