The redistributor of wealth is a little sensitive about that “socialist” label. President Obama lashed out at reporters for calling him a socialist today.
He then compared his record to President Bush’s: 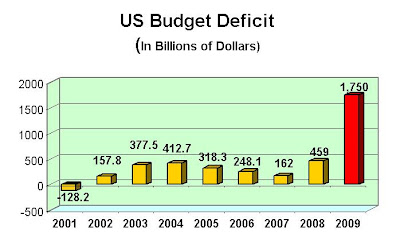 Good luck with that.
Bush never quadrupled the deficit in one year.

Less than 90 minutes after Air Force One landed, the telephone rang. President Obama was on the line, wanting to add one more point to a response he gave during an interview with The New York Times.

On a flight from Ohio to Washington on Friday, Mr. Obama was asked whether his domestic policies suggested that he was a socialist, as some conservatives have implied.

“The answer would be no,” he said, laughing for a moment before defending his administration for “making some very tough choices” on the budget.

As the interview progressed, Mr. Obama never returned to the question. When he called, he said he had been thinking about it as he boarded the helicopter taking him back to the White House.

“It was hard for me to believe that you were entirely serious about that socialist question,” Mr. Obama said from the Oval Office.

He then dismissed the criticism, saying the large-scale government intervention in the markets and the expansion of social welfare programs had begun under his Republican predecessor, George W. Bush.

Sorry O… Bush never made it his priority to redistribute the wealth of this nation.
You own it. Wear it.