Vince Shlomi, the “ShamWow” guy, was arrested for giving a Miami Beach hooker the “Slap Chop” after she bit his tongue. 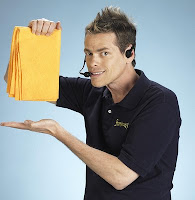 Meet Vince Shlomi. He’s probably better known to you as the ShamWow Guy, the ubiquitous television pitchman who has been phenomenally successful peddling absorbent towels and food choppers. Shlomi, 44, was arrested last month on a felony battery charge following a violent confrontation with a prostitute in his South Beach hotel room. According to an arrest affidavit, Shlomi met Sasha Harris, 26, at a Miami Beach nightclub on February 7 and subsequently retired with her to his $750 room at the lavish Setai hotel. Shlomi told cops he paid Harris about $1000 in cash after she “propositioned him for straight sex.” Shlomi said that when he kissed Harris, she suddenly “bit his tongue and would not let go.” Shlomi then punched Harris several times until she released his tongue. The affidavit, a copy of which you’ll find here, notes that during the 4 AM fight Harris sustained facial fractures and lacerations all over her face (she is pictured here in mug shots snapped following busts in 2008 and 2005).

The Slap Chop- Good on nuts… Not for hookers.