But, that didn’t stop Barack Obama from blaming global warming for the massive floods in North Dakota this week.
The Scientific American reported:

President Obama says potentially historic flood levels in North Dakota are a clear example of why steps need to be taken to stop global warming. Heavy rain and blizzards have caused eight rivers in the state to swell to flood levels and emergency management officials are warily watching the Red River, which could surpass record levels late this week.

“If you look at the flooding that’s going on right now in North Dakota and you say to yourself, ‘If you see an increase of two degrees, what does that do, in terms of the situation there?'” Obama told reporters at the White House Monday. “That indicates the degree to which we have to take this seriously.”

Figures.
Here’s another map from the NCDC-NOAA: 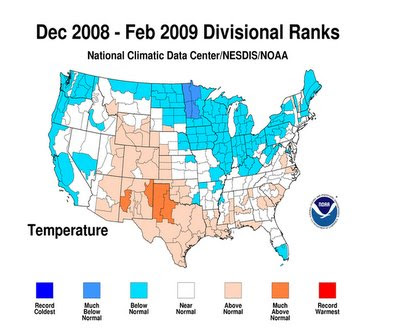 Sadly, the liberal media won’t bother to check out the facts on this latest Obama blunder.