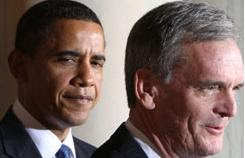 Senator Judd Gregg withdrew his nomination as Obama’s Commerce Secretary last month because of “irresolvable conflicts” on issues including the economic stimulus package.

It was obvious to most Capitol Hill insiders why President Obama wanted Republican Judd Gregg as a member of his cabinet: He’s one of the sharpest money-minds in Congress.

But instead of getting Gregg’s counsel within the administration, Treasury Secretary Tim Geithner found himself today of the receiving end of Gregg’s fiscal conservative wrath.

In a hearing before the Senate Budget Committee Gregg dressed down Geithner with facts, figures, and charts. While always keeping his cool, the exchange was somewhere between a mother’s scolding, a drill sergeant’s questioning and an attorney’s cross examination.

In his opening statement, Gregg politely called the administration’s budget forecast a lie.

“The argument that it cuts the debt in half in four years is, ahh, is truly spurious,” he told Geithner.

President Obama himself gives Gregg’s comments a sense of stinging credibility. When the president introduced Gregg as his nominee for Commerce Secretary last month, he said Gregg is known for is fiscal discipline.