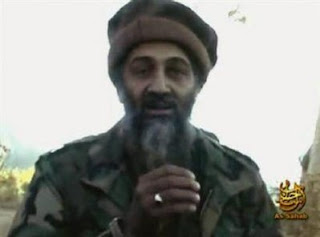 Osama threatened moderate Araab nations again in his latest tape.
He also called on jihadists to liberate Iraq from the US army and then launch attacks on Israel from Jordan.
Good luck.
Reuters reported:

Al Qaeda leader Osama bin Laden accused conservative Arab leaders of plotting with the West against Muslims and urged his followers to prepare for jihad (holy war), in a recording posted on Islamist websites.

“The hearts of our rulers are like those of the enemies. Whether in Najd (Saudi Arabia) or in Egypt, they never soften, Pharaohs who have returned to humiliate Arabs,” he said, reciting a poem honouring Gaza resistance to Israel’s offensive.

He also called for the creation of a body of devout clerics to draw up a list warning Muslims about “enemies, hypocrites, their media such as newspapers … radio stations and satellite channels, of which the most dangerous are the latter two.”

The list, he said, should include the British Broadcasting Corporation, U.S.-funded Arabic-language television al-Hurra in Iraq, and the Saudi-funded Al Arabiya channel in Dubai.

Bin Laden described Israel’s offensive in Gaza and its attacks on the Palestinian territory as a “holocaust” and said militants wanting to help Gazans should support Iraqis fighting U.S.-led forces and Baghdad’s government.