Perfect.
Michelle must have sent Rahmbo down to the 7-11 to pick through the movie basket.
Bargain Basement Special– Was $27.98 Now Only $19.99! 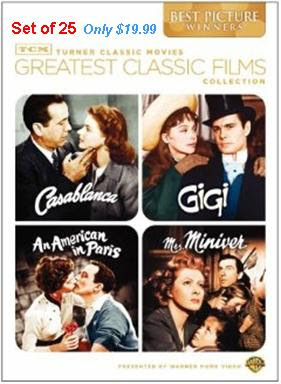 What an embarrassment.
The Obamas stiffed the Brits with a cheap 25 DVD movie package.
The Daily Mail reported:

As he headed back home from Washington, Gordon Brown must have rummaged through his party bag with disappointment.

Because all he got was a set of DVDs. Barack Obama, the leader of the world’s richest country, gave the Prime Minister a box set of 25 classic American films – a gift about as exciting as a pair of socks.

Mr Brown is not thought to be a film buff, and his reaction to the box set is unknown. But it didn’t really compare to the thoughtful presents he had brought along with him.

The Prime Minister gave Mr Obama an ornamental pen holder made from the timbers of the Victorian anti-slave ship HMS Gannet.

Here’s some advice for the Browns: Next time swing by Walgreens on the way into town.
Pick up a can of assorted nuts, some Cheez Whiz and a lava lamp for the kids.

More… Here’s something else the Obamas forgot about:

It would be funny if the DVDs Mr Obama gave Mr Brown were Region 1 NTSC and therefore not compatible with the UK where DVDs are region 2 and video format is PAL.
I would love to see someone on Fleet Street ask Brown whether the President gave Gordon brown DVDs that are not playable in England. That could prove amusing.

UPDATE 2: And a reader at Power Line added this:

Reader Ken Gage observes: “Going back to the topic of is he just that stupid or is he doing it on purpose, consider the fact that Gordon Brown is blind in one eye and has some visual deterioration in the other (how much is unclear). A calculated insult could not have been more on-target.” Jules Crittenden asks whether Obama is “wicked, childish or dim.”