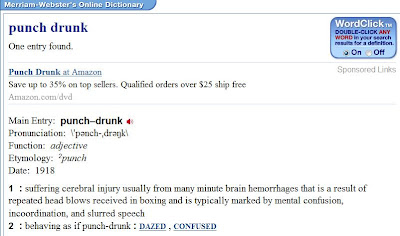 punch-drunk– suffering cerebral injury usually from many minute brain hemorrhages that is a result of repeated head blows received in boxing and is typically marked by mental confusion, incoordination, and slurred speech

And, here is the transcript of the exchange from “60 Minutes” last night:

Steve Kroft: You’re sitting here. And you’re laughing. You are laughing about some of these problems. Are people going to look at this and say, ‘I mean, he’s sitting there just making jokes about money?’ How do you deal with — I mean: explain… Are you punch-drunk?”

Obama: No, no. There’s gotta be a little gallows humor to get you through the day. Sometimes my team talks about the fact that, uh, if you had said a year ago that the least of my problems would have been Iraq — which is still a pretty serious problem — I don’t think anyone would have believed it. But we’ve got a lot on our plate, and a lot of difficult decisions we’re going to have to make.

Of course, violence in Iraq was way down even last year at this time so Obama was not paying much attention to the war either. 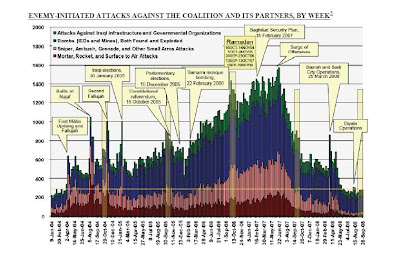 The Bush Surge was already showing amazing results last year at this time. Enemy initiated attacks were way down. US fatalities were way down. Al-Qaeda in Iraq was defeated.
Maybe Obama was punch-drunk then, too.