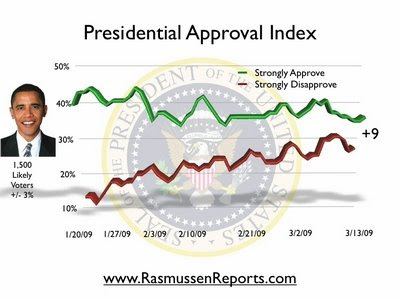 The Wall Street Journal reported today that Barack Obama’s approval rating is dropping below where President Bush was at this time in 2001.

It is simply wrong for commentators to continue to focus on President Barack Obama’s high levels of popularity, and to conclude that these are indicative of high levels of public confidence in the work of his administration. Indeed, a detailed look at recent survey data shows that the opposite is most likely true. The American people are coming to express increasingly significant doubts about his initiatives, and most likely support a different agenda and different policies from those that the Obama administration has advanced.

Polling data show that Mr. Obama’s approval rating is dropping and is below where George W. Bush was in an analogous period in 2001. Rasmussen Reports data shows that Mr. Obama’s net presidential approval rating — which is calculated by subtracting the number who strongly disapprove from the number who strongly approve — is just six, his lowest rating to date.