The Obama Administration announced on Friday that they were planning on releasing “non-threatening” Gitmo detainess inside the US. Team Obama even wants to give these terrorists financial assistance.

The main group of terrorists in question are the 17 Uighur Muslim separatists from China.
Team Obama says they are not a threat. But, who are they then and what are they doing in Gitmo?
FOX News host Eric Shawn and Lieutenant Colonel Bill Cowan discussed these Gitmo detainees this morning:

The Uighur terrorists in question were trained by Al-Qaeda at terror training camps. Shawn noted that some of the Uighur detainees were trained in Tora Bora. They are also linked to the terror group that was planning attacks on the Beijing Olympic. 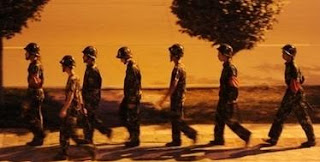 This was followed by a series of bombings on a dozen government sites in Kuqa City in China the following week.