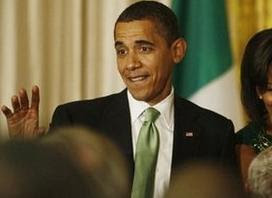 Obama thanks himself in TelePrompter stumble.

President Obama graciously thanked himself for inviting everyone to the St. Patrick’s Day party yesterday at the White House.
SKY News reported, via LGF:

A teleprompt blunder has led to Barack Obama thanking himself in a speech at the White House in a St Patrick’s Day celebration.

Irish Prime Minister Brian Cowen was just a few paragraphs into an address in Washington when he realised it all sounded a bit too familiar.

It was. He was repeating the speech President Barack Obama had just read from the same teleprompter.

Mr Cowen stopped, turned to the president and said: “That’s your speech.”

A laughing Mr Obama returned to the podium to take over but it seems the script had finally been switched and the US president ended up thanking himself for inviting everyone to the party.