The stock market had its worst January since 1896 followed by its worst February since 1933 due largely to the historic spending and tax initiatives proposed by the Obama Administration.

President Obama is not doing any better. 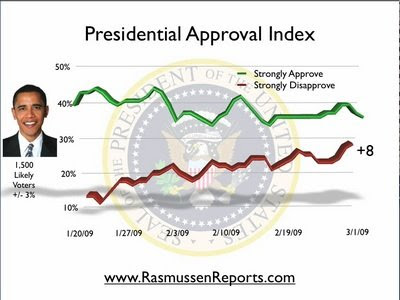 Rasmussen Polling Shows Plunge: 30% to 8% on Strong Approval in Less Than 40 Days:

Special Guests reported that Barack Obama’s popularity ratings have plummetted according to the latest Rasmussen Poll.

The week Barack Obama was sworn in, the ‘Obama Approval Index’ his approval rate was a whopping 30%. By March 1 to a meager 8%. Considering he had 15% on February 27, this is a veritable freefall.