This was a sad moment for the country.
President Obama hit a disgusting new low in the politics of moral equivalence.
He compared the violence and death of a suicide bombing to the AIG bonus scandal.
Pretty sick. 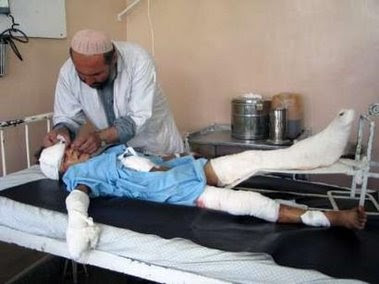 An Afghan doctor checks a boy wounded by a suicide car bomb in the southern province of Kandahar August 3, 2006. (REUTERS/Ismail Sameem)

But today, President Obama took that rhetoric in a different direction. He actually upped the ante explaining that AIG is like a suicide bomber.

“We had to step in, it was the right thing to do, even though it is infuriating,” Obama said, explaining why the government needed to bail out the troubled banks.

“The same is true with AIG,” he said. “It was the right thing to do to step in. Here’s the problem. It’s almost like they’ve got — they’ve got a bomb strapped to them and they’ve got their hand on the trigger. You don’t want them to blow up. But you’ve got to kind of talk them, ease that finger off the trigger.”

It ought to be interesting to see the media spin this one.