O-Bummer. The One’s approval rating continues to drop like a rock.
It’s at its lowest point since inauguration. 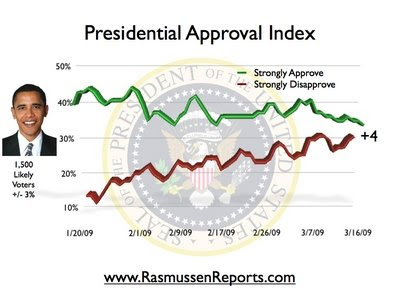 The Rasmussen Reports daily Presidential Tracking Poll for Monday shows that 36% of the nation’s voters now Strongly Approve of the way that Barack Obama is performing his role as President. Thirty-two percent (32%) now Strongly Disapprove giving Obama a Presidential Approval Index rating of +4, his lowest rating to date.

In related news- O-wonder of wonders…
Americans continue to prefer free markets over the Obama-Pelosi-Reid dream of socialism.
The LA Times Blog reported:

In the poll a minority (48%) approved of Obama’s $700-billion financial institution bailout with disapproval now at 40%. And that was before the current kerfuffle over bonuses to AIG employees with federal bailout money. Mark Silva has some more numbers here in the Swamp.

Despite the economic turmoil of recent months, fully 70% still say they’re better off in a free market economy even with its severe ups and downs, while 54% are willing to accept more temporary government involvement at this time.