Minister Beaten After Clash With Muslims On TV Show

A British Minister was assaulted and threatened after he clashed with Muslims on his TV show. 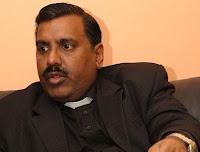 A group of “Asian” men slapped him, punched him, pulled his hair, and threatened him after the debate.
The Daily Mail reported:

A Christian minister who has had heated arguments with Muslims on his TV Gospel show has been brutally attacked by three men who ripped off his cross and warned: ‘If you go back to the studio, we’ll break your legs.’

The Reverend Noble Samuel was driving to the studio when a car pulled over in front of him. A man got out and came over to ask him directions in Urdu.

Mr Samuel, based at Heston United Reformed Church, West London, said: ‘He put his hand into my window, which was half open, and grabbed my hair and opened the door.

He started slapping my face and punching my neck. He was trying to smash my head on the steering wheel.

Then he grabbed my cross and pulled it off and it fell on the floor. He was swearing. The other two men came from the car and took my laptop and Bible.’

The Metropolitan Police are treating it as a ‘faith hate’ assault and are hunting three Asian men.