“I just want to make one thing very clear. Folks need to understand what’s happening here, Sean. You’ve already talked about it. This is a systematic effort, I think, very well planned out to distract. They’re saying, “Oh, yeah, prices are going up for everything you have to pay for. Oh, let’s talk about Rush… Your 401K just dropped. Let’s talk about Rush… The stock market it tanking. Let’s talk about Rush…” We get it. We’ve figured it out now what the game plan is.”

Meanwhile… The Obama Economic Disaster continued today as stocks dropped another 174 points out of the blocks. 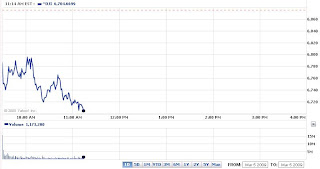 UPDATE 2: House Minoritiy Leader John Boehner (R-OH) also has an article on the Democrat distractions today at The Washington Post:

In the first two months of 2009, the Democratic Congress and the White House have spent more money than the combined cost of the Iraq and Afghanistan wars and the response to Hurricane Katrina. After they doled out taxpayer dollars at such a blistering pace, the instinct of many inside the Beltway is to do what’s most convenient: desperately try to change the subject by creating straw men — called “the party of no” — to rally against.

And in a carefully calculated campaign, operatives and allies of the Obama administration are seeking to divert attention toward radio host Rush Limbaugh, and away from a debate about our alternative solutions on the economy and the irresponsible spending binge they are presiding over. This diversionary tactic will not create a single job or help a single family struggling in today’s economic crisis. And that is where our focus should be.