We now know that the media will spin anything to make Barack Obama look good despite the colossal economic disaster due to his policies.
Today the corrupt media rejoiced in the news that President Obama will withdrawal troops from Iraq.
This is despite the fact that David Petraeus already announced this plan back in 2007. 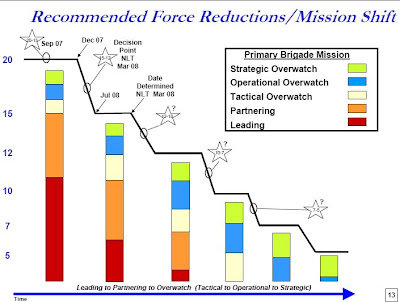 Because democrats and the media were so focused on discrediting Petraeus back in 2007, they ignored his drawdown plans during his progress report to Congress.

The media rejoiced today in Obama’s plans to withdraw troops from Iraq.
The AP reported:

A total of 12,000 American and 4,000 British troops will leave Iraq by September, the U.S. military said Sunday, hours after a suicide bomber killed 32 people at the entrance of Baghdad’s main police academy.

…Maj. Gen. David Perkins said the troop withdrawals will reduce U.S. combat power from 14 brigades to 12 along with some supporting units. The U.S. also plans to turn over 74 facilities and areas under its control to the Iraqis by the end of March as part of the drawdown.

President Barack Obama has decided to remove all combat troops by the end of August 2010 with the remaining forces leaving by the end of 2011. The 4,000 British troops due to leave are the last British soldiers in Iraq.

That 12,000 is right in line with what the generals have been saying all along.

Of course, none of this would be possible without the leadership of George W. Bush.
If Obama would have had his way, Iraq would be a genocidal terrorist state today.
Not that this bothered him.

Instead, our troops will come home victorious.
No wonder the troops aren’t impressed with the Cut & Runner in Chief.