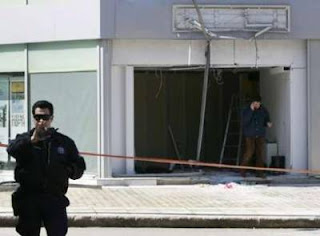 Another radical Far Left group has turned to bombs.
The Revolutionary Struggle group took responsibility for the recent bombings at Citibank in Athens.
The AP reported:

A far-left Greek militant group claimed responsibility for recent attacks against Citibank offices in Athens, saying they were carried out because of the international financial crisis, a newspaper reported Thursday.

The weekly Pontiki newspaper published a statement from the Revolutionary Struggle group, which claimed responsibility for a failed car bomb attack on Citibank offices in Athens on Feb. 18 as well as a bomb attack Monday on a suburban Citibank branch that caused damage but no injuries.

Authorities did not immediately comment on the statement or its authenticity, but the newspaper has been used by the militant group in the past to publish proclamations.