This is disturbing.
Isn’t James Carville the same Leftist hack who was behind the campaign to bash Rush for saying he wanted Obama’s socialist agenda to fail? 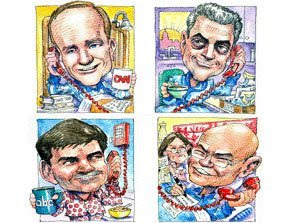 (The Politico)
James Carville, Rahm Emanuel, Paul Begala and George Stephanopoulos have been holding daily phone conversations for nearly 17 years and were behind the coordinated media attacks on Rush Limbaugh.

Carville wanted Bush to fail on 9-11.
Bill Sammon and Sweetness and Light reported:

On the morning of Sept. 11, 2001, just minutes before learning of the terrorist attacks on America, Democratic strategist James Carville was hoping for President Bush to fail, telling a group of Washington reporters: “I certainly hope he doesn’t succeed.”

Carville was joined by Democratic pollster Stanley Greenberg, who seemed encouraged by a survey he had just completed that revealed public misgivings about the newly minted president.

“We rush into these focus groups with these doubts that people have about him, and I’m wanting them to turn against him,” Greenberg admitted.

The pollster added with a chuckle of disbelief: “They don’t want him to fail. I mean, they think it matters if the president of the United States fails.”

Minutes later, as news of the terrorist attacks reached the hotel conference room where the Democrats were having breakfast with the reporters, Carville announced: “Disregard everything we just said! This changes everything!”

The press followed Carville’s orders, never reporting his or Greenberg’s desire for Bush to fail. The omission was understandable at first, as reporters were consumed with chronicling the new war on terror. But months and even years later, the mainstream media chose to never resurrect those controversial sentiments, voiced by the Democratic Party’s top strategists, that Bush should fail.

That omission stands in stark contrast to the feeding frenzy that ensued when radio host Rush Limbaugh recently said he wanted President Obama to fail. The press devoted wall-to-wall coverage to the remark, suggesting that Limbaugh and, by extension, conservative Republicans, were unpatriotic.

UPDATE: Liberal commentator Ellen Ratner hoped that Bush would mess up the war and fail in a 2003 interview.
Rush Limbaugh may be against socialism but at least he didn’t wish for American soldiers and marines to be killed.