The assault weapons they found were a dead give away that the facility was more than just an orphanage. 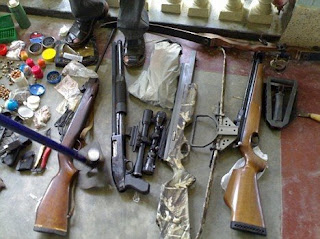 Holy war: Some of the guns found at the madrassa. (Daily Mail)

A British man who twice had been acquitted for bomb plots in the UK was arrested for running a terror training camp out of an orphanage in Bangladesh.
The Daily Mail reported, via Free Republic:

A British man accused of running an orphanage which was really a front for a terrorist training camp has been arrested by police in Bangladesh.

Dr Faisal Mostafa, who has twice been acquitted of bomb plots in the UK, was picked up in the capital city Dhaka.

Police said they had also arrested a man identified only as Badl, who is alleged to be his ‘agent’ in Bangladesh.

Captain Shafiul Alam, of the Rapid Action Battalion, said: ‘They were both arrested yesterday.

‘They are being charged with illegally keeping arms, explosives and ammunition, and with militancy and terrorism.’