Obama promised during the campaign to create a Socialist National Civilian Security Force similar to what they have in other Marxist regimes. Yesterday, the US House took the first step in organizing Dear Leader’s dream youth service corp. 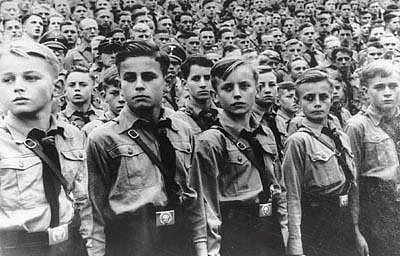 The House passed the Generations Invigorating Volunteerism and Education Act yesterday. The bill includes language indicating young people will be forced to participate in mandatory national service programs. The bill also states that “service learning” will be a mandatory part of the youth curriculum.
That doesn’t sound much like “volunteerism” does it?

The Generations Invigorating Volunteerism and Education Act, known as the GIVE Act, was passed yesterday by a 321-105 margin and now goes to the Senate.

Under section 6104 of the bill, entitled “Duties,” in subsection B6, the legislation states that a commission will be set up to investigate, “Whether a workable, fair, and reasonable mandatory service requirement for all able young people could be developed, and how such a requirement could be implemented in a manner that would strengthen the social fabric of the Nation and overcome civic challenges by bringing together people from diverse economic, ethnic, and educational backgrounds.”

Section 120 of the bill also discusses the “Youth Engagement Zone Program” and states that “service learning” will be “a mandatory part of the curriculum in all of the secondary schools served by the local educational agency”.

“The legislation, slated to cost $6 billion over five years, would create 175,000 “new service opportunities” under AmeriCorps, bringing the number of participants in the national volunteer program to 250,000. It would also create additional “corps” to expand the reach of volunteerism into new sectors, including a Clean Energy Corps, Education Corps, Healthy Futures Corps and Veterans Service Corps, and it expands the National Civilian Community Corps to focus on additional areas like disaster relief and energy conservation,” reports Fox News.

“There is even a provision in the bill for uniforms.”