Egyptian policemen sexually assaulted prisoner Imad Kabir with a broomstick.
The violent scene of Imad writhing in agony as he was being sodomised with a broomstick was filmed and later circulated on the Egyptian blogs.
Torture by security forces is common in Egypt.

The Egyptian victim of the violent police abuse, Imad Kabir (pictured above), was sentenced to three months in jail for resisting the abuse. 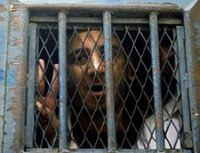 His blogging outraged religious authorities so he was jailed. There is no freedom of expression in Egypt.

When asked about Egypt’s horrible human rights record, Secretary of State Hillary Clinton responded, “We all have room for improvement.”
The Washington Post reported:

According to State’s latest report on Egypt, issued Feb. 25, “the government’s respect for human rights remained poor” during 2008 “and serious abuses continued in many areas.” It cited torture by security forces and a decline in freedom of the press, association and religion. Ms. Clinton was asked about those conclusions during an interview she gave to the al-Arabiya satellite network in Sharm el-Sheikh, Egypt. Her reply contained no expression of concern about the deteriorating situation. “We issue these reports on every country,” she said. “We hope that it will be taken in the spirit in which it is offered, that we all have room for improvement.”

Ms. Clinton was then asked whether there would be any connection between the report and a prospective invitation to President Hosni Mubarak to visit Washington. “It is not in any way connected,” she replied, adding: “I really consider President and Mrs. Mubarak to be friends of my family. So I hope to see him often here in Egypt and in the United States.” Ms. Clinton’s words will be treasured by al-Qaeda recruiters and anti-American propagandists throughout the Middle East. She appears oblivious to how offensive such statements are to the millions of Egyptians who loathe Mr. Mubarak’s oppressive government and blame the United States for propping it up.

So, what happened to that “smart diplomacy” we were promised?
Hillary’s not already in over her head like her boss, is she?