The Rasmussen Reports daily Presidential Tracking Poll for Saturday shows that 36% of the nation’s voters now Strongly Approve of the way that Barack Obama is performing his role as President. Thirty-two percent (32%) Strongly Disapprove giving Obama a Presidential Approval Index rating of +4 (see trends). The number of Americans who believe government spending will rise during the Obama years has increased significantly in recent months. 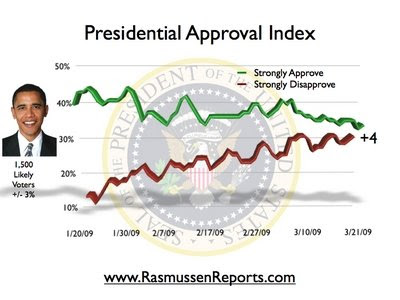 Barack Obama’s approval rating has even dropped below where President Bush was at this time in 2001.
So much for the “change we’ve been looking for.”