It couldn’t have happened to a more deserving individual.
George Galloway and his entourage were stoned in Egypt. 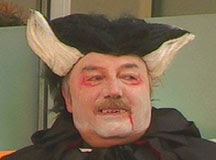 Galloway playing a devil on a British reality show.

The pro-Hezbollah pro-Hamas pro-Obama Saddam apologist was attacked in Egypt on his way to Gaza.
The Times Online reported:

A convoy led by the maverick MP George Galloway carrying supplies for Gaza has been attacked in Egypt, apparently injuring several people travelling in his party.

The convoy, carrying aid worth £1 million, was pelted with stones and vandalised with anti-Hamas slogans after it stopped overnight in El-Arish, a small town around 28 miles from the Rafah border crossing with Gaza.

The attack comes weeks after Mr Galloway, of the Respect party, described Egypt’s President Hosni Mubarak as a “tyrant” and “criminal” and demanded that he be overthrown by his country’s armed forces.

In 2005 Galloway praised Iraqi “martyrs” who were killing US soldiers.

Get the F**k Out of My Way!" - BLM Mob PULLS GUN on ANGRY TEXAS DRIVER After He Screams at Them for Shutting Down Traffic in Plano

Antrim County Court Hearing on Monday: Judge to Decide Whether to Expand Audit or Shut the Case Down as Requested by Democrat Secretary of State

IT EXPERT: Maricopa County Officials Refuse to Provide Routers and Passwords to Senate Auditors - They Don't Want Public to Know Where Data Was Sent and When It Was Sent