Last week they were telling British troops returning from Iraq to “go to hell.”
Today they are receiving police protection from the country they loath. 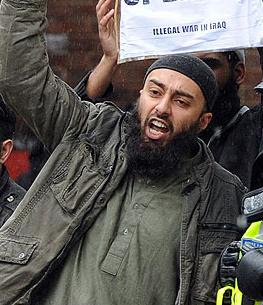 Radical Brit-hater Yousaf Bashir is now under police protection in the UK.
The UK Sun reported:

He and his 14 cronies waved placards calling the soldiers — from 2nd Battalion, the Royal Anglian Regiment — “the butchers of Basra”, “murderers and terrorists” and “baby killers” in Luton, Beds.

On Friday night, two windows and glass in the door of the home in the town he shares with his parents were smashed, along with the rear windows of cars parked in the drive.

Two PCs were sent to Bashir’s house on Saturday and their car was still there last night.

Tory MP and ex- army officer Patrick Mercer blasted: “You have to wonder whether police time wouldn’t have been better spent countering terrorism than protecting its sympathisers.”

The protesters were shouting, “Anglican soldiers go to hell!” as the British soldiers marched by.
Here is the video from that past:

But, today they are under police protection.