Oh, this was terrific…
After the Obama White House coordinated attacks on El-Rushbo with democrats, the media and liberal groups,
Rush Limbaugh challenged Barack Obama to debate his socialist New Deal agenda today. 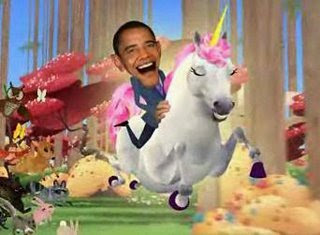 (JibJab)
Of course, Obama won’t go on Limbaugh’s show to debate the ideas.
Without a teleprompter?… No way.
This was brilliant move by Rush.
It put the focus back on the White House… and their horrid record.
Via the Rush Limbaugh website:

RUSH: It is on the record — thanks to Politico.com — since last fall, the White House, led by Rahm Emanuel, the chief of staff to Barack Obama, has been targeting me, your host, your harmless, lovable little fuzzball. Their standard operating procedure: they need a demon to distract and divert from what their agenda is. They need a demon about whom they can lie so as to persuade average Americans that they’re the good guys, the benevolent good guys, and the mean SOBs are their enemies trying to stop this great young little president from doing miraculous and wonderful things.

Here is a new ad that this union bunch is running in Washington, DC, ladies and gentlemen. And, of course, it’s been picked up all over the Web. You guys, if you haven’t done so, you gotta go to RushLimbaugh.com. The DNCC, whatever it is, they have a questionnaire up there. It’s hilarious. I have to give ’em credit. You can see it right now at RushLimbaugh.com.

…But make no mistake about it. Emanuel is the leader of all of this. Carville and Begala are just trying to ride my fame into their fortune and become relevant again. Begala and Carville, don’t confuse them with the powerbrokers that are managing this. It all Emanuel. Begala and Carville are second-rate talking heads on CNN. CNN has no audience. Rahm Emanuel is the power behind the throne — and don’t let his effeminate nature and his ballerina past mislead you on this. He may look effeminate (he was a ballerina at one time) but he has the feral instincts of a female rat defending its young. Well, take a look. When Emanuel and Carville and Begala are together (and I’ve seen pictures) it looks like a reunion of the Village People. (singing) Y! M! C! A! They are really the official greeters in Roswell, New Mexico in Area 51 where Carville was born.

My point here is that these are really odious, empty, nasty people who are feasting on their own arrogance. They are power hungry. But, you know what? They’ve never had a serious debate over ideas. Their goal is to destroy opponents, which is what they’re trying to do now. They don’t want to engage opponents. Their idea of victory is the destruction of the opponent. They’re not for a level playing field. They want to clear the playing field so that their ideas do not have to undergo any scrutiny. So what do they do? They leak stories to the Politico intended to create impressions about their own importance and their brilliance, when in fact they aren’t even bit players on the nation’s stage. This is Emanuel, and this is Obama.

…But I have an idea. If these guys are so impressed with themselves, and if they are so sure of their correctness, why doesn’t President Obama come on my show? We will do a one-on-one debate of ideas and policies. Now, his people in this Politico story, it’s on the record. They’re claiming they wanted me all along. They wanted me to be the focus of attention. So let’s have the debate! I am offering President Obama to come on this program — without staffers, without a TelePrompTer, without note cards — to debate me on the issues. Let’s talk about free markets versus government control. Let’s talk about nationalizing health care and raising taxes on small business.

UPDATE: White House Spokesman Gibbs admitted today, after they got busted, that attacking the media may not be the best idea.