Even with the lapdog media carrying his water for him Barack Obama continues to slide in the polls after serving less than two months in office.
Rasmussen reported: 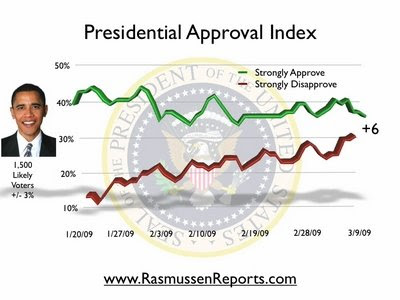 Obama’s approval index is now down to six points.

To be fair, the fact that Obama still has a 6 point advantage is significant considering the Dow has dropped faster under Obama than any other new president in 90 years.
He hasn’t exactly had a stellar start.

Jim Hoft
Jim Hoft is the founder of The Gateway Pundit, one of the top conservative news outlets in America. Jim was awarded the Reed Irvine Accuracy in Media Award in 2013 and is the proud recipient of the Breitbart Award for Excellence in Online Journalism from the Americans for Prosperity Foundation in May 2016.
BREAKING: Former Missouri Governor Eric Greitens and Friend Rush to Perform Life-Saving Measures on Shooting Victims in St. Louis! -- Eric Greitens Just Spoke with The Gateway Pundit
Former Missouri Governor Eric Greitens Blasts Corrupt St. Louis Circuit Attorney and Cowardly Republicans (VIDEO)
"Traditional Media Is Right Behind the Mob - Marxists Who Oppose Everything I Stand For" - Attorney Mark McCloskey Speaks Out on Tucker Carlson (VIDEO)
Horror Show: Dr. Fauci and NIAID Are Conducting Coronavirus Vaccine Trials and Looking for Volunteers
Crips Member Terrence Page Who Beat Catholics at St. Louis Prayer Rally is Arrested on Sundry Charges
See more...