But, will he inflate your tires? 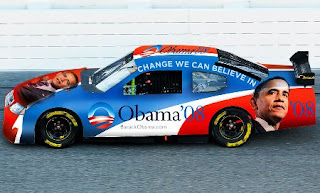 In recent months, my Auto Task Force has been reviewing requests by General Motors and Chrysler for additional government assistance as well as plans developed by each of these companies to restructure, modernize, and make themselves more competitive.

Year after year, decade after decade, we have seen problems papered-over and tough choices kicked down the road, even as foreign competitors outpaced us. Well, we have reached the end of that road.

We cannot, we must not, and we will not let our auto industry simply vanish. But we also cannot continue to excuse poor decisions. And we cannot make the survival of our auto industry dependent on an unending flow of tax dollars. These companies — and this industry — must ultimately stand on their own, not as wards of the state.

That is why the federal government provided General Motors and Chrysler with emergency loans to prevent their sudden collapse at the end of last year — only on the condition that they would develop plans to restructure. In keeping with that agreement, each company has submitted a plan to restructure.

But after careful analysis, we have determined that neither goes far enough to warrant the substantial new investments that these companies are requesting. And so today, I am announcing that my administration will offer GM and Chrysler a limited period of time to work with creditors, unions, and other stakeholders to fundamentally restructure in a way that would justify an investment of additional tax dollars; a period during which they must produce plans that would give the American people confidence in their long-term prospects for success.

…As an initial step, GM is announcing today that Rick Wagoner is stepping aside as Chairman and CEO. This is not meant as a condemnation of Mr. Wagoner, who has devoted his life to this company; rather, it’s a recognition that it will take a new vision and new direction to create the GM of the future…

It is my hope that the steps I am announcing today will go a long way towards answering many of the questions people may have about the future of GM and Chrysler. But just in case there are still nagging doubts, let me say it as plainly as I can — if you buy a car from Chrysler or General Motors, you will be able to get your car serviced and repaired, just like always. Your warrantee will be safe.

In fact, it will be safer than it’s ever been. Because starting today, the United States government will stand behind your warrantee.

Expect that same excellent service that you have grown to love from your local DMV.

This does nothing to actually save the US automakers, but expands government power in this arena at a time when we’re already seeing just how incompetent it is in handling the fiscal and monetary policy.

More… Poor Richard Wagoner. He will be forced to leave GM with only a $20 million retirement package.